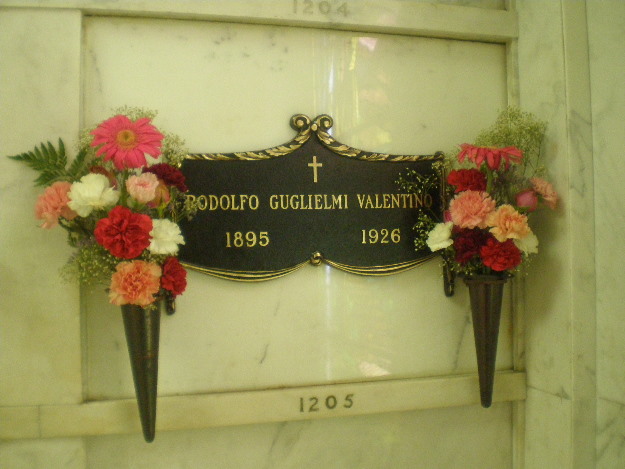 
Inside the Cathedral Mausoleum at Hollywood Forever Cemetery, in the far southeast corner of the building, you'll find the "temporary" crypt of legendary actor Rudolph Valentino. More than 80 years after his sudden death, fans and admirers still bring flowers almost every day to place on Valentino's crypt, which identifies him as "Rodolfo Gugliemi Valentino."

Born in Italy, Valentino arrived in the United States in 1913, intending to seek his fortune in the land of opportunity. Instead, he lived in shabby immigrant neighborhoods in New York City, and as his money ran out he alternated between living in a succession of cheap apartments and living on the street. He worked a series of odd jobs and was arrested several times on suspicion of petty theft and blackmail. Eventually, Valentino found success as a dancer in nightclubs around Broadway, then joined the cast of "The Merry Monarch," a musical review on a national tour. 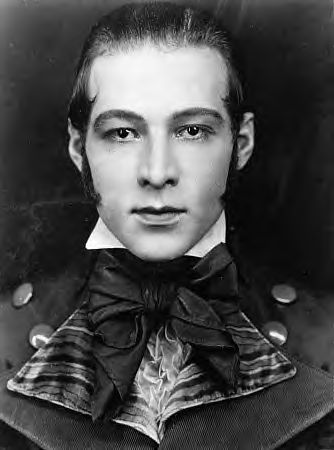 But the show folded in Utah, and Valentino continued west on his own, first to San Francisco, then to Los Angeles, arriving in 1917.

For the next few years, Valentino played small parts in a series of small films, making his screen debut in an uncredited role as a dancer in "Alimony" (1917), for which he was paid $5 per day. Gradually, he was given larger roles, usually playing villains, in films including "Eyes of Youth" (1919), "Big Little Person" (1919), "Stolen Moments" (1920) and "Passion's Playground" (1920).

Valentino's big break came in 1921, when scriptwriter June Mathis and director Rex Ingram were preparing a production of "The Four Horsemen of the Apocalypse" for Metro Pictures Corp. Ingram and Mathis, who was also chief of Metro's script department, both wanted Valentino to play the lead in the film -- a grim, anti-war story of cousins who end up fighting on opposite sides in World War I. Due in no small part to Valentino's performance in a dramatic and romantic tango scene, the film was a huge success, and Valentino became an instant star. With his darkly smoldering good looks and dancer's grace, coupled with his exotic background, Valentino became the symbol of fantasy and passion for women across the country. 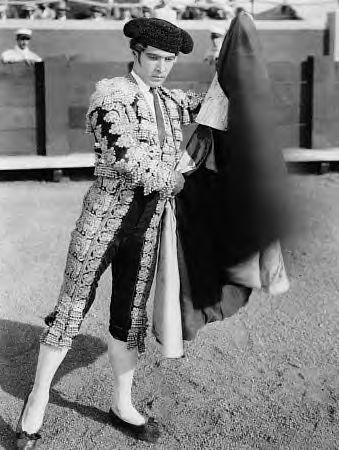 Valentino-mania was reaching a peak, with women fainting in the aisles in theaters whenever his films were shown. In response, the Chicago Tribune took issue with Valentino and his legions of imitators as the new image of masculinity in 1926, asking, "When will we be rid of all these effeminate youths, pomaded, powdered, bejeweled and bedizened, in the image of Rudy -- that painted pansy?" With his manhood publicly questioned, Valentino challenged the writer to a boxing match. When the writer did not respond, Valentino claimed victory and vindication.

After completing work on "The Son of the Shiek" (1926), Valentino went on a nationwide tour to promote the film. While in New York City on Aug. 15, 1926, he complained of stomach pain and was taken to Polyclinic Hospital. Exploratory surgery revealed an acute perforated gastric ulcer. Although the perforation was repaired, Valentino contracted a post-surgical infection, and died. He was 31. Almost immediately, rumors begin to surface that Valentino has been poisoned, shot by a jilted lover, or a jealous husband. At his funeral services in New York City, an estimated crowd of 100,000 gathered outside the funeral home. When his body was brought back to Hollywood, thousands of fans stood in railroad stations across the country just to see the train as it sped past. In Los Angeles, an estimated 80,000 mourners crowded in and around the cemetery grounds when Valentino's casket was carried into the Cathedral Mausoleum. A small airplane flew overhead, showering the funeral procession with thousands of rose petals.

Actress Pola Negri, who said that she and Valentino had been engaged, attended Valentino's funeral services in Los Angeles, flinging her herself on his coffin and repeatedly fainting -- though most witnesses said she did it as a stunt for the press.

The original plan was that Valentino's stay in the mausoleum would be only temporary, until a more suitable memorial could be built somewhere on the cemetery grounds. The memorial, designed by architect Matlock Price, was to include several life-sized statues of Valentino in his most-celebrated screen roles. Valentino's friend, June Mathis, and her husband, cinematographer Silvano Balboni, owned two crypts in the mausoleum, and they agreed to let one of them be used for Valentino's body. Less than a year after Valentino's death, Mathis died of a heart attack at the age of 35, and was also buried in the Cathedral Mausoleum, next to Valentino.

A few years later, when all plans for a new Valentino memorial had fallen through, Mathis' widower, Silvano Balboni, sold Valentino's "temporary" crypt to the Valentino family, and the crypt became Valentino's permanent home.

One of the greatest and most enduring Hollywood legends concerns the mysterious "Lady in Black" who visits Valentino's crypt each year on the anniversary of his death. The visits began on the first anniversary when the woman, clad in black from head to toe, including a heavy black veil, entered the mausoleum, left roses at Valentino's crypt, and departed without saying a word. But who was the "Lady in Black"? And what was her relationship with Valentino?

According to the most popular and enduring version of the legend, Valentino was friends with a woman whose daughter, Ditra Flame, was seriously ill in a hospital. Valentino went to visit the girl and brought her a single red rose. "You're not going to die at all," Valentino told her. "You are going to outlive me by many years. But one thing for sure -- if I die before you do, you please come and stay by me because I don't want to be alone, either. You come and talk to me."

Shortly after Valentino's visit, little Ditra got better. When Valentino died a few years later, she remembered his request and brought a bouquet of red roses to his crypt every year on the anniversary of his death, but she never spoke about it, and never told anyone her story. The press noticed her visits, and widely publicized the story of the mysterious "Lady in Black."

In the early 1940s, a former Ziegfeld showgirl named Marian Watson, who performed as Marian Brenda, began visiting Valentino's crypt and claimed that she was the original "Lady in Black." According to various reports, Valentino either proposed to her the night before he was hospitalized in 1926, or she secretly married him in 1925 and gave birth to at least one of his children. Other women began to come forward and claim that they were the original "Lady in Black," and told various stories about their relationships with Valentino.

Perhaps in response to all the "Lady in Black" pretenders, Ditra Flame finally took off her black veil and told her story in 1947. She continued to visit Valentino's crypt until 1954, when she became one of many "Ladies in Black," and the annual memorial service had became a gaudy and sensational spectacle. She resumed her annual visits in 1977, but wearing street clothing instead of the traditional mourning outfit. Flame died in 1984 and her gravestone, in San Jacinto, CA, identifies her as the "Lady in Black."

The second generally recognized "Lady in Black" was Estrellita del Regil, a former Spanish actress who began visiting Valentino's crypt in the early 1970s as a tribute to her late mother, whom she felt was Valentino's unrequited love. She continued her visits until 1993, when illness prevented her from making her annual pilgrimage.

Taking the role as the third "Lady in Black" was Vicki Callahan, who did not originally intend to carry on the tradition. She was simply a great fan of the silent star, and wanted to pay her respects. But when she was shown, dressed in black, on a television news broadcast in 1995 placing roses at Valentino's crypt, and was identified as "the third Lady in Black," Callahan accepted the job, and continues to make her annual visits.